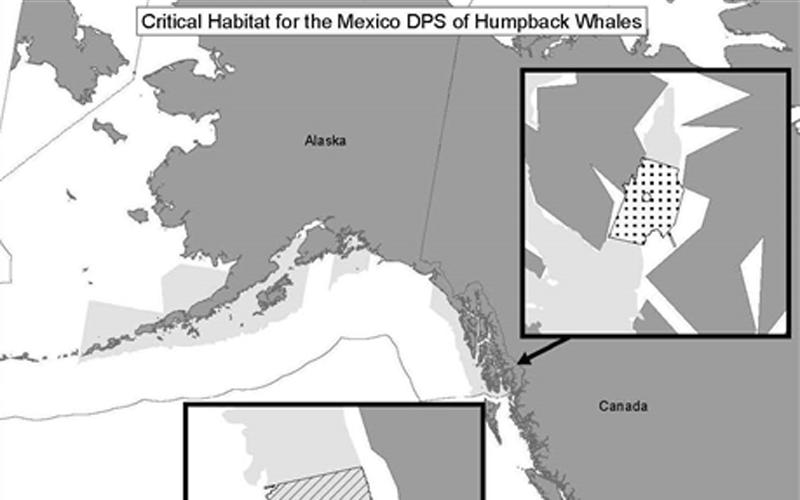 As a result of a lawsuit brought in March of 2018 by the Center for Biological Diversity specifying critical habitat designation for the ESA-listed Mexico and Western North Pacific subpopulations of Humpback whales, NMFS has proposed designating an area the size of California off the coast of Alaska as Critical Habitat which includes nearly all of Southeast Alaska waters. This “broad brush” approached to the proposed large area designations are the result of limited data. The expansive critical habitat designation encompasses areas that are not critical feeding areas for humpback whales.

Humpback whales were listed as Endangered world-wide in 1973 without further refinement of the global population structure or listing status until 2016, when NMFS began dividing humpback populations based on where they breed. Three humpback subpopulations use Alaska waters to feed: the Hawaiian subpopulation which was removed from the ESA list in 2016, the Western Northern Pacific subpopulation of which 55% use the Bering Sea/Aleutian Island to feed during the summer; and, the Mexican population, of which only 2% use the region from northern Vancouver Island to Yakutat Bay. From many accounts of fishermen testimony humpback whale populations in Southeast are very high, the highest ever observed.

While designating Critical Habitat in itself is not anticipated to restrict or harm our fishery, we are wary of the “broad brush” in which this proposed action demonstrates. Having the CH regulatory framework added and in place to our geography will prove cumbersome and costly to small communities and our small boat fishery, as it has the potential to increase regulatory burdens. It has been shown that fewer than 2% of the Mexican subpopulation use Southeast Alaska waters. This is truly a small and peripheral amount. Common sense and statistics should set the agency straight in their reaction to this lawsuit. Southeast waters should be removed from the NMFS Critical Habitat designation.